Skip to Search Skip to Main Content
SKI & SNOW
SNOW TO SPEAK:
A MINI-GLOSSARY FOR THE MOUNTAIN
Skiers and snowboarders have a lingo all their own. Whether you're a veteran powder hound or attempting your first bunny hill, there will be times when you feel like you’ve landed in a foreign country and need a translator. Consider this a quick guide to deciphering some of the terms and slang spoken by those who live for the ride. And to help you avoid being immortalized as a "gaper".
APRÈS-SKI
It's alphabetically first, but après is what comes last after a full day on the mountain—the literal "after" party of revelry at the lodge or nightspots in a resort town.

BACKCOUNTRY
Rugged, untamed terrain far from the groomed resort runs. This is the domain of adventurous skiers and riders willing and able to chart their own course in the snowy wilderness.

BLUEBIRD DAY
When you have clear skies and sunshine above you and fresh snow beneath you. What could be better? Answer: Nothing.

BONY
When the slopes are scattered with rocks and branches poking up through minimal snow coverage, typical of conditions at the start and end of the season.

CARVE, CARVING
Making clean, powerful turns in the snow with the edges of your skis or snowboard. Not related to turkeys or cutlery.

CHATTER
The vibration level of skis or a snowboard turning on packed snow. The harder the surface and the faster the speed, the bigger the chatter.

CHOWDER
Chopped up powder that's difficult to navigate with grace.

CRUST
A frozen layer of snow typically just above softer stuff. Depending on the depth, this can be either a crème brûlée layer for epic runs or the boot-grabbing menace of clean turns.

FIRST TRACKS
Being among the first to ski/board down untouched snow, either fresh powder or fresh groom. The universe's reward for not hitting the "snooze" button.

FLAT LIGHT
The view through your goggles when conditions don't provide enough contrast to decipher upcoming obstacles and that bump in the hill suddenly comes out of nowhere. Not ideal.

FRESHIES
Fresh, untouched powder. Some hardcore skiers and boarders spend their winter "chasing freshies" by following the snow forecast around their region—and well beyond.

GNAR
Something one shreds. A versatile term (derived from "gnarly") that can be positive or negative. Among others, it can refer to quality snow, difficult conditions, or navigating an extreme run, jump, or feature.

JERRY
Also: "gaper." A novice or foolhardy skier or boarder making ill-advised choices that might end up being immortalized via @jerryoftheday, a popular Instagram account documenting epic fails.

LIFTIE
A chairlift operator. The five-second philosopher of the eight, six-pack, quad, triple, double, single, and T-bar lifts, offering quick words of welcome and wisdom before you're whisked away.

LINE
Not the queue for the chairlift. This is the route skiers and boarders plot out ahead as they navigate a run. It's their ideal expected path around, over, or through the terrain below.

MASHED POTATOES
Heavy wet or melting snow that feels like you're skiing in ... well, you get the idea.

OFF-PISTE
Skiing/boarding away from marked/groomed runs (or "piste" in French), typically outside official ski area boundaries but close enough to get back to the parking lot without a helicopter.

POW, POW-POW
Powder. A layer of lighter, fluffier—and recently fallen—snow. Hitting the just-right weight and depth of fresh pow is the holy grail.

RIPPER
A skier that knows what they're doing. They can hit a run or feature hard but with grace and skill.

SEND IT
To go big on an ambitious feature, jump, or run with the aim of finishing it cleanly. Often used as an encouraging command to a friend as they approach said challenge.

SHRED, SHREDDING
To ride or ski with vigor, more commonly used for snowboarding but ubiquitous to both boarders and skiers.

SKINS, SKINNING
Reusable traction strips called "skins" attach to the bottom of downhill skis and allow you to walk uphill on them, called "skinning," typically to reach backcountry or off-piste terrain.

STEEP AND DEEP
A winning combination of big inclines and deep powder.

STEEZE, STEEZY
Style + ease. Whether it's hitting rails in the terrain park, going big off a jump, or just carving a perfect line, steeze is doing it with effortless execution.

STOMP, STOMPED
To finish a run or feature cleanly with authority, as in the emphatic landing of a trick or jump.

TELEMARK
A semi-masochistic style of skiing with special bindings, skis, and boots that allow you to lift your heel and hold a lunge position on every turn.

TRACKED OUT
A run that started out with smooth fresh snow is turned to chowder after everyone and their mom has gone down it.

YARD SALE
When you crash hard enough to leave various items—skis, poles, goggles, gloves, etc.—splayed out in your wake for all to peruse on the slope above you.
Want more outdoors? Connect with @Columbia1938 on Instagram. Or drop in on our skiing and snowboarding page. 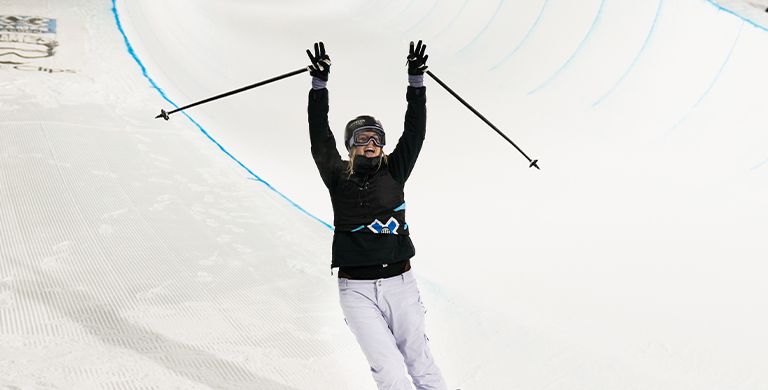 SKI & SNOW
ASK THE PROS: OFF THE SLOPES WITH CASSIE SHARPE AND SARAH HOEFFLIN
Sarah Hoefflin and Cassie Sharpe share their tips for staying active in a global pandemic.
Read More › 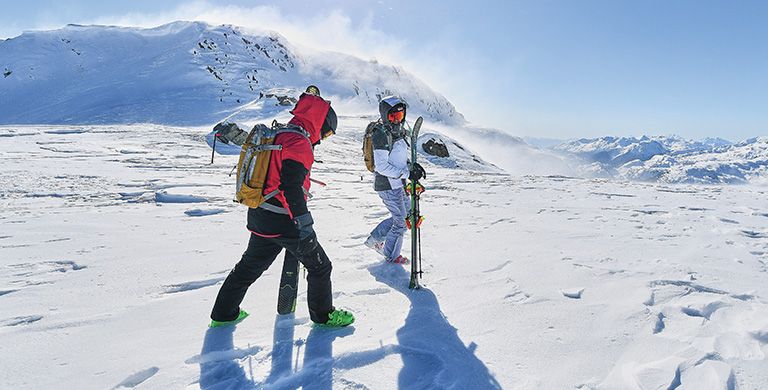 SKI & SNOW
WHAT TO WEAR: SKIING AND SNOWBOARDING
Tips for staying comfortable and protected on the slopes, whatever the weather.
Read More › 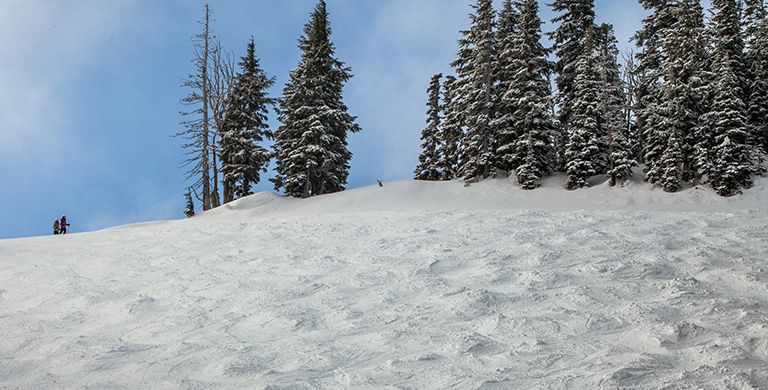