Who is Hotdog Hans? Meet the legend behind the legend

Columbia Sportswear sat down with Olympic skier Alex Ferreira to learn more about his crotchety alter ego
BY RACHEL CAVANAUGH
A group of teenagers mills around the top of a halfpipe as an old man in an ’80s ski jacket and denim jeans walks up the side, muttering to himself and dragging his skis behind him in the snow.

The kids exchange looks and start to laugh. That is, until he drops into the halfpipe.

Hitting the lip at full speed, the apparent octogenarian shoots 15 feet out of the pipe and into the air. Instantly, their smirks turn into looks of awe as he stomps a double cork 1620.

“Whoa!” one exclaims. “That was sick!” another shouts in disbelief.

What the kids don’t know is that the “old man” is in fact 28-year-old Olympic skier Alex Ferreira and they’ve become unknowing costars in his parody film series “Hotdog Hans.”

The real-life ski legend rips through the parks and pipes at Buttermilk and Snowmass, capturing footage of peoples’ hilariously baffled faces as they watch a foul-mouthed, crotchety old man in denim jeans perform world-class ski tricks.

Vital Films, which produces the series, has already released two films— “Hotdog Hans” and “Hotdog Hans 2.” A third is scheduled to come out in January.

Columbia Sportswear sat down with Ferreira to talk about the films and where he finds inspiration for the character. 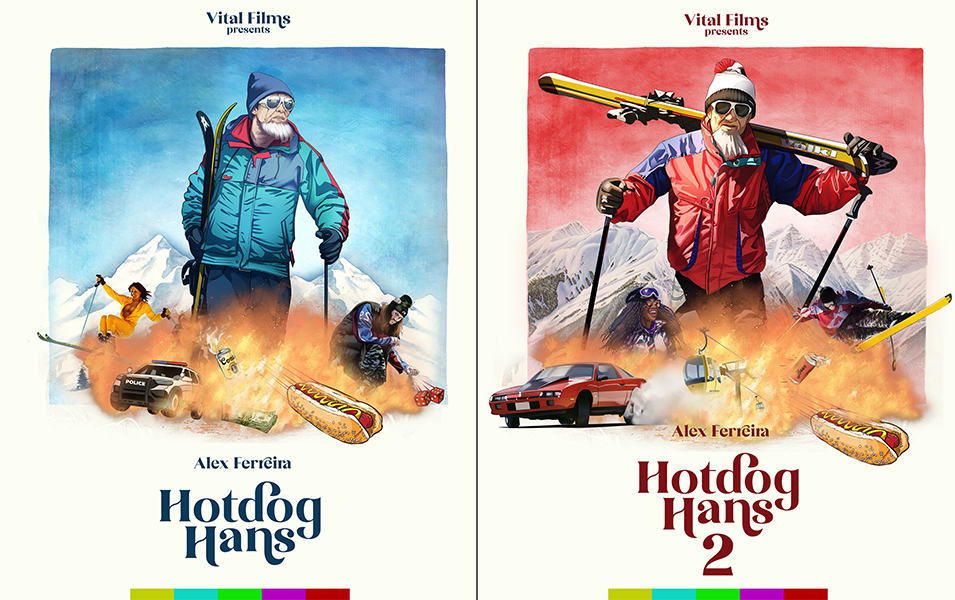 Olympic skier and halfpipe silver medalist Alex Ferreira stars in Vital Films’ “Hotdog Hans” series in which he dresses up like an old man and pulls skiing pranks around Aspen.
Q: How much of the Hot Dog Hans films are scripted and how much is ad libbing?
Alex Ferreira: The first one was all ad lib. The second one was probably 80% improv and the rest was scripted. I think what makes it work so well is that we have such a great crew.
Q: Is it all candid footage? Were those snowboarders, for example, real kids out there at the halfpipe?
Alex Ferreira: Absolutely. None of them knew what was going on. The first hour and a half, we were completely messing with people. Then the kids caught on. They could tell by my gait of skiing. It was much easier in the first film. Now it's getting harder to fool people because Hans is becoming more well-known.
Q: Where did the concept come from? What made you want to create these films?
Alex Ferreira: One of my best friends, Kyler Sciarrone, who’s also a cinematographer, came to me and said, “We should dress you up as an old man like Uncle Drew (Kyrie Irving).” He and his business partner, Matt Hobbs, had been talking about the concept for a while. I said, “Let's do it.” We had no idea Hans was gonna be who Hans is. Originally we were just having fun.
Q: So it wasn’t meant to be a promotional thing—it was just you and your friends having fun on the hill?
Alex Ferreira: Exactly. Zero intention.
Q: Tell us more about who Hotdog Hans is.
Alex Ferreira: He’s this old guy. No one really knows his age. He's an ex hot dogger who loves booze, skiing, and women. He's just this bad boy who says it how it is.
Q: How does he relate to Alex Ferreira?
Alex Ferreira: The way I view it is that Alex is the nice guy. He's a great skier, he's a good person—and Hans is this bad boy animal. This crazy person. He's my alter ego.
Q: Is that how you view yourself? Like the nice guy who’s well behaved and doesn't booze or party super hard?
Alex Ferreira: I think how I see myself—and also how others view me—is as very serious. Because I'm training and working and I look serious on camera. When people meet me, they often say, “I wasn't expecting you to be like that.” I'm a nice person. It’s just when I'm in the zone, usually, and you see me—I'm in the zone.
“Hans is the antithesis of Alex in a lot of ways, which I love. That inner battle.”
Alex Ferreira
Q: Is it fun getting to play someone who’s the complete opposite of you?
Alex Ferreira: Yeah, absolutely. It's great. Hans is the antithesis of Alex in a lot of ways, which I love. That inner battle. And being able to play an older person, which basically means I can do whatever I want. Everyone's just thinking, “That guy's old, give him a break.” [Laughs]
Q: Is there an older person in your life who provides you with inspiration?
Alex Ferreira: I get a lot of the inspiration from my grandpa. He’s my best friend and I swear this guy is out of control. He's 85 years old living in an 18-year-old’s body. Or at least in an 18-year-old’s brain. I take a lot from him when I’m improv-ing.
Q: He sounds young at heart. Is he still physically active too?
Alex Ferreira: Absolutely. My grandpa is this guy who never stops. He's cutting the lawn, then he’s doing the leaves, and then he’s doing the pool. Going to the boat and rowing in the river. The guy is insane. And I feel very similar now. I can never sit still. I’m like, “What are we doing next?”
Q: Do you anticipate yourself being like him at that age? Will you still be shredding when you're 85?
Alex Ferreira: I see myself skiing till the day I die. I'll probably be a supercentenarian. Age 110 is when I see myself skiing till. 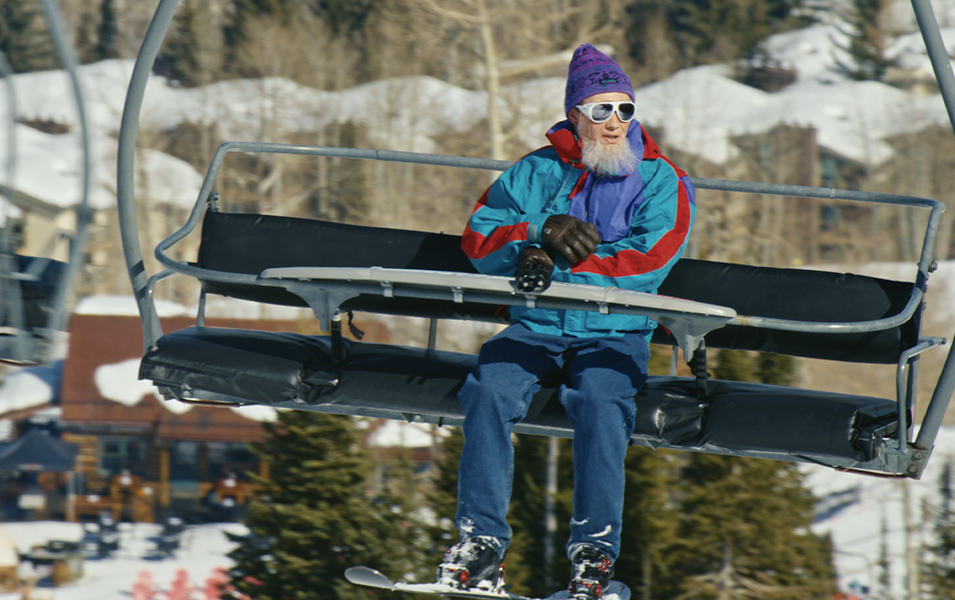 “I’m really coming into my prime,” Ferreira mutters from the chairlift in the first “Hotdog Hans” film.
Q: What do people love so much about Hans? What is it that he represents?
Alex Ferreira: I think mountain towns in general, a lot of them are getting so stuffy and it's getting harder and harder to get there. I think Hans brings a bit of hope to the old ski bum or the ex hot dogger. The weekend warrior. The guy who just skis in denim. Even I appreciate it. I’m like, “Yes. We’ve got to bring more of that back.” I hope that's what Hans does.
Q: For folks who feel like skiing has become too commercial, is there something endearing about a guy who skis in denim and doesn't care about all that? He doesn't need fancy gear. He can just put his jeans on and strap a belt around his waist and be like, “I’ll out-ski all you kids.”
Alex Ferreira: [Laugh] Yeah, exactly. I mean that's what Han says. That's his motto. “Make skiing cheap again.”
Q: He’s kind of like those old-timers you see at ski resorts who’ve been around so long they’ve become iconic. They look ridiculous because they're wearing 30-year-old gear, but they know how to ski and people respect them. Does Hans play into that character as well?
Alex Ferreira: Yeah, for sure. There's always that old-timer who's been at the resort forever and ever. You definitely see that around Aspen. We’ve got a couple of them. And I think Hans represents that for Aspen. He’s Aspen's pastime of the ’70s, the ’60s, the ’50s, even the ’80s. This guy just loves skiing and he was a world champion and people love him. 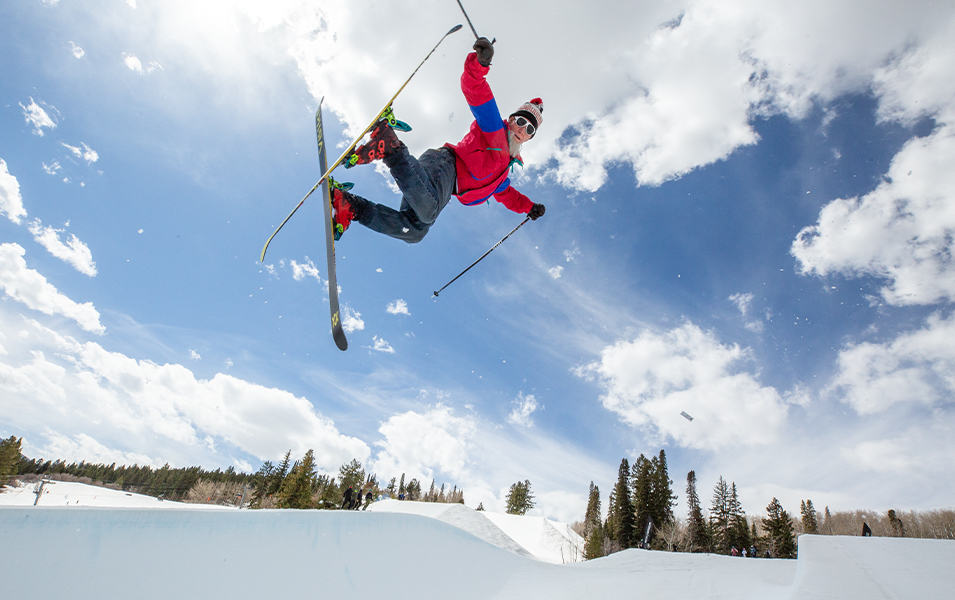 In addition to the comedy and pranks, the “Hotdog Hans” films also feature epic, if somewhat goofy, ski footage.
Q: And it feels like there’s something nostalgic, too, that everyone can relate to—even people who don’t ski. We’ve all had places we love that we’ve had to watch change.
Alex Ferreira: Totally. I mean, the town of Aspen is a great example of that. When we were filming, we went into the Red Onion on a whim—it's the locals bar of Aspen, right? And then months later it closed because of the pandemic. It’s not in existence anymore. Yet Hans was there.
Q: What can people look forward to next from Hotdog Hans?
Alex Ferreira: “Hotdog Hans 3” will be coming out next month and I highly recommend it. It's my favorite one so far. We're doing something different and really building this character. So if you enjoyed the first two, you’re definitely gonna enjoy this one. In terms of Hans himself, I don't know where he's gonna be next. The guy is tough to track down.
Q: Anything else people should know about Hans?
Alex Ferreira: Hotdog Hans is a naughty boy. If you see him, stay away. 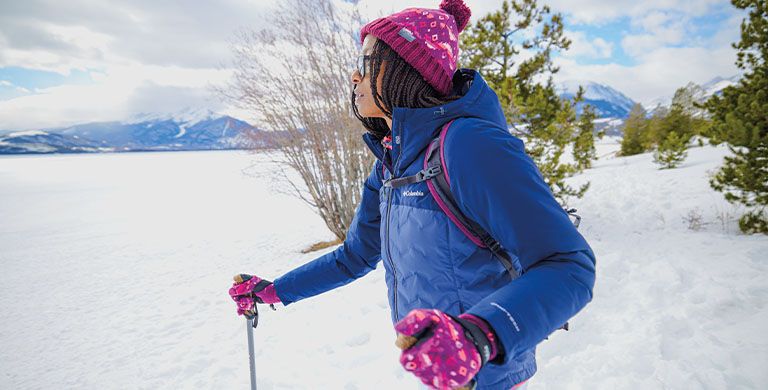 What to Wear on Your First Snowshoeing Trip 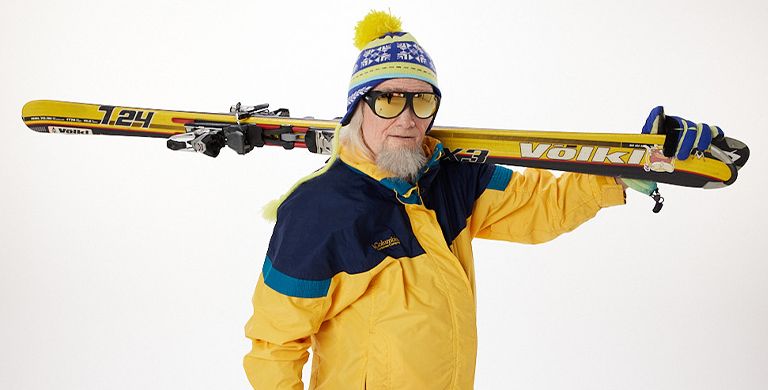 Hotdog Hans: The Most Legendary Skier The World Has Ever Known 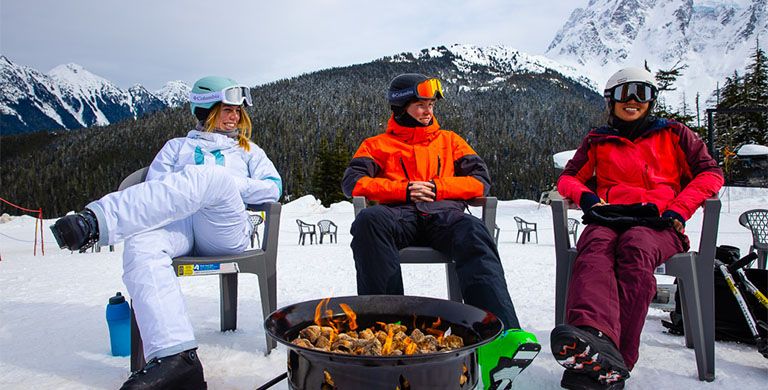